Pre-orders have been made available but there are physical and digital versions to choose from, these include different bonuses. Red Dead Redemption 2 will be available on October 26th, 2018 on Playstation 4 and Xbox One. Which edition should you buy? Well let’s take a look.

All pre-order customers will receive two free bonus pieces of content for the story mode in Red Dead Redemption 2. First being the War Horse which allows for “greater courage and stamina than the average steed,” according to Rockstar. The name is actually the same as the best horse in the first Red Dead Redemption which is fitting because it also had high speed, health and stamina. 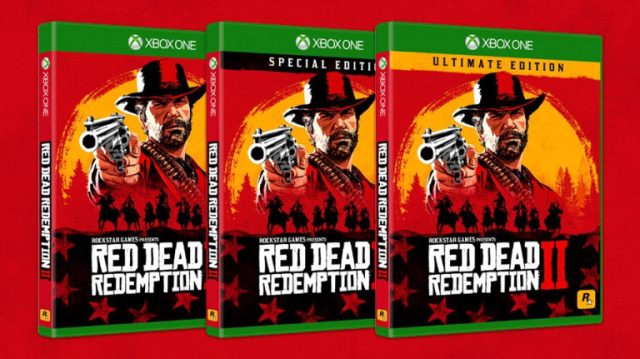 Red Dead Redemption Xbox One covers of normal, Special Edition at $79.99 and Ultimate Edition at $99.99.

The normal edition of Red Dead Redemption 2 is priced at $59.99 while the Special Edition is an extra $20 at $79.99. The Ultimate Edition is a further $40, available for $99.99. While both editions are also available digitally, you will miss out on the physical printed map which is a great collector’s item. The Ultimate Edition also get’s an added bonus of a Steelbook case. 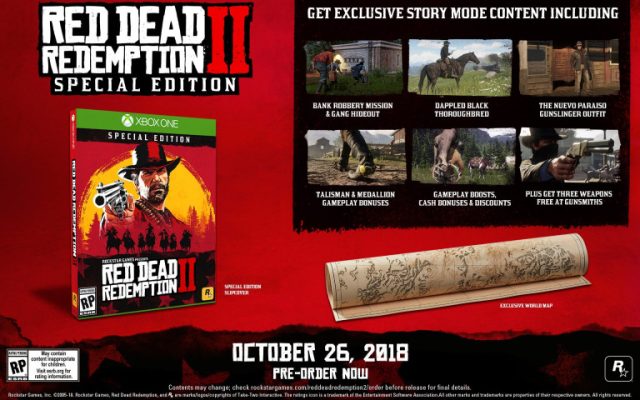 However, if you do choose to purchase a digital copy you will have added bonuses on top the War Horse and Outlaw Survival Kit. All digital pre-order copies come with in-game cash which will give Morgan enough currency to purchase a weapon, food and some useful items as well as ammunition. Pre-ordering a digital copy by July 31st will get you a further bonus of a treasure map in-game, which allows Morgan to find some special loot that’s hidden all over the Red Dead world. This exclusive is available with digital pre-orders.

Not only do you receive bonuses within the Red Dead Redemption 2 game, but you will also gain bonuses in another Rockstar title. You will receive GTA$ for Grand Theft Auto Online in Grand Theft Auto 5, the amount you will receive depends on which version of the game you purchase. Red Dead Redemption 2 stardard copy will get you half a million GTA $, Special Edition will get you 1 million GTA$ and the Ultimate Edition will give you 2 million GTA$. Players should note that the GTA bonus cash is only available with pre-order digital copies.

Should You Choose Special or Ultimate Edition?

The Special Edition of Red Dead Redemption 2 also features a hefty list of exclusive content for story mode which includes mission, horse, outfit, weapons and gameplay bonuses. But by paying an extra $20 for the Ultimate Edition you will get a bunch of content for game’s online components. These include costumes, weapons and progression bonus which is in addition to the Special Edition. 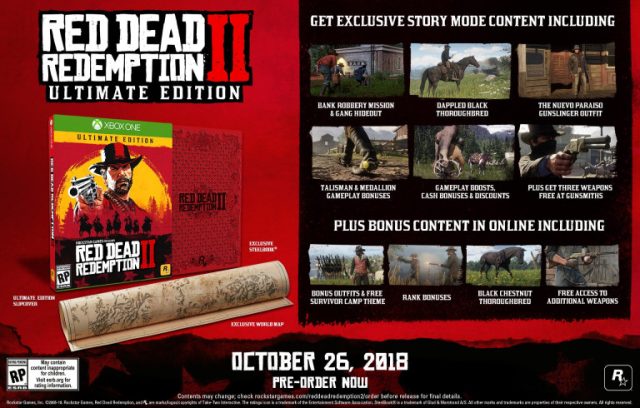 If you want to make your RDR2 life easier, getting the Ultimate Edition does add the benefits of additional weapons and if you’re GTA V player you get more in game cash. However, if you’re not a fan of GTA V and just wanted a slight boost in your in-game experience of RDR2, the Special Edition maybe your best bet.

If you’re a die-hard fan, this bundle is one that shouldn’t be missed, the Red Dead Redemption Collector’s Box. A bundle that is priced at $99.99 does not include a copy of the game but instead is a treasure trove of Red Dead Redemption collectables. 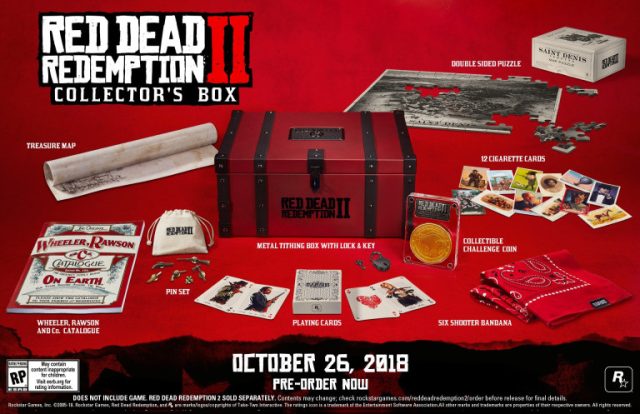 The box includes a high quality treasure map, printed on durable paper and is a printed copy of the digital map from the game. Another prize item is a 100 piece jigsaw puzzle featuring the city of Saint Denis. The collection also includes a 150 page book replica catalogue, cigarette cards, pin set, playing games, six shooter bandana and a collectable challenge coin. These are all housed in a metal tithing box with lock and key, so you can keep any bandits out of your treasures. The bundle is only available via the Rockstar Warehouse and some retailers.

Red Dead Redemption 2 releases October 26th on Playstation 4 and Xbox One, and is available for pre-order now.

Are you planning on picking up a pre-order? Let us know in the comments below which one you are planning on getting.