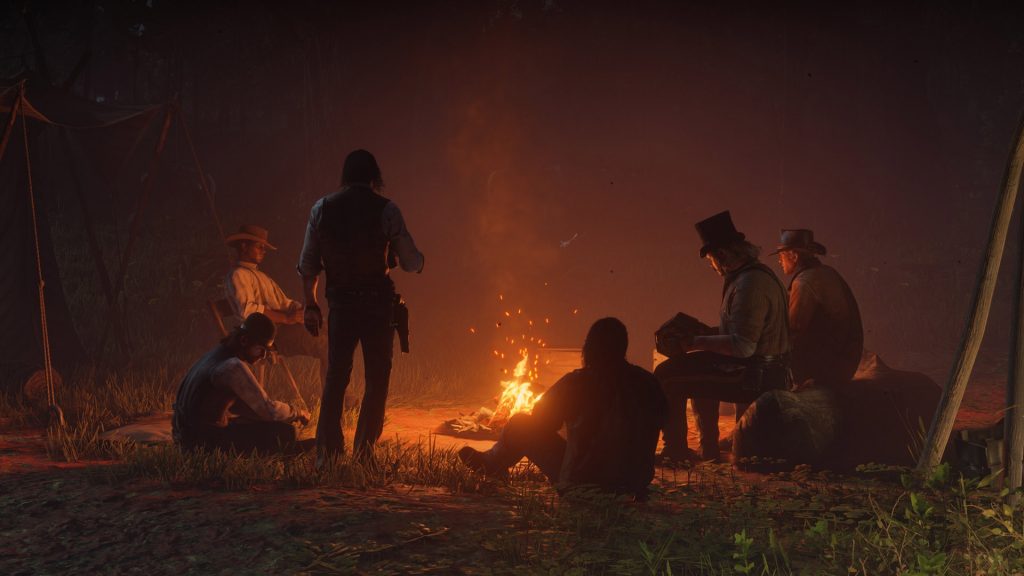 Red Dead Redemption 2 tells the tale of a gang of outlaws struggling to survive as civilization sweeps across the Wild West. As the Van der Linde gang plan heist after heist, other events and stories are transpiring all around North America. Although these narratives aren’t front-and-center, they are some of the most intriguing and hilarious side stories Red Dead has to offer.

Tucked away in the hills of New Hanover is a dilapidated shack, totally unassuming from the outside, but it holds a deadly and terrifying secret. Venture into this termite-ridden shack and you’ll discover a dozen beds full of skeletal remains and a cloth-draped leader sitting at the head of a table.

This eerie scene hides more than just a mystery of how all these people died as a stray note reveals that they were a part of a cult. The note directs players to return during a half-moon, at 2 hours past the stroke of midnight. Upon entering the shack at this time, a brilliant green light will fill the room, the source of which is a UFO.

After spotting this extra-terrestrial, players can trek to the highest peak of Mount Shann, and around the same time, see another UFO flying through the sky. It turns out those people who committed mass suicide believed these UFOs to be god-like entities, and that they would join them in the sky after death.

While there are a lot of strange and creepy people to meet while playing Red Dead Redemption 2, there are also some sincere, honest, and generous characters as well. One such character whom Arthur might encounter while travelling around Ambarino is a feller by the name of Hamish. This war veteran has been bucked off his horse and is unable to get him back, due to his prosthetic leg being stuck in the stirrup.

After returning the horse, Hamish puts out the offer that Arthur can swing by his cabin whenever he wants and they might go fishing or hunting. It’s a sweet moment that is made all the more touching if Arthur takes him up on the offer. These two old men spend most of their time talking about life from an age gone by, of an America they both remember and love, and how they feel a bit out of place in this new world.

We won’t reveal how this tale ends, but it’s worth visiting Hamish a few times to take him up on his offer of fishing and hunting. It’s one of the few sincere friends Arthur will make during Red Dead Redemption 2, and not one you’ll want to miss.

The blind prophet is less of a side story in Red Dead 2 and more of a chance encounter with some spiritual overtones. There are a lot of roads to take across North America, and along some of them stands a lonely old man with a walking stick. This man might be blind, but he can see a lot more than most people can.

Offer a small donation to this wanderer and he’ll spout some truth about Arthur and his journey. These words are often vague, but they are resounding and Arthur seems to find some reassurance in them. Is this man a soothsayer, clairvoyant, or a prophet? Or perhaps he’s simply offering some astrology-like service for someone looking for answers.

Despite Saint Denis being a rather progressive area of North America, it’s not quite ready for the risqué and bawdy artwork of mister Charles Châtenay. This hilariously cheeky Frenchman is first met in a bar in Saint Denis, and after giving Arthur one of his racy drawings, disappears to find another lonely housewife in need of comfort.

You see, Charles Châtenay isn’t just an artists who enjoys painting women’s bottoms, he’s also a vivacious lover, often seducing his models, much to the chagrin of the husbands. His escapades reach a critical point during a fancy art exhibit where all hell breaks loose as men try to beat up poor Mister Châtenay for painting their wives nude. Arthur finds the whole event utterly hilarious, and enjoys trading blows while surrounded by the artist’s work.

The side story is one of the more provocative entries in Red Dead Redemption 2, but it’s also full of heart as Charles Châtenay tries to find a place in the world for his taste in artwork. Though Arthur mightn’t understand the subtleties of the art world, he found a friend in Charles Châtenay.

These terrifyingly silent stalkers of the swamps are quite possibly the creepiest part about exploring the Wild West. Spend enough time traveling the roads into Saint Denis, past the marshy stench of the swamp, and you might just come across a corpse strung up in a tree. Linger for too long and you’ll encounter the mysterious people known only as the Night Folk.

They come slinking out of the swamps like a fog, moving slowly and deliberately toward you without making any noise whatsoever. Do nothing, and they’ll rip you from your horse and stab you in the heart. It’s a terrifying scene to witness, but thankfully a few bullets can put them down easily enough.

The world of Red Dead Redemption 2 is full of interesting people to meet and stories to experience. Every person breathes life into the beautiful world Rockstar Games has created, and we can’t wait to saddle up and experience more.